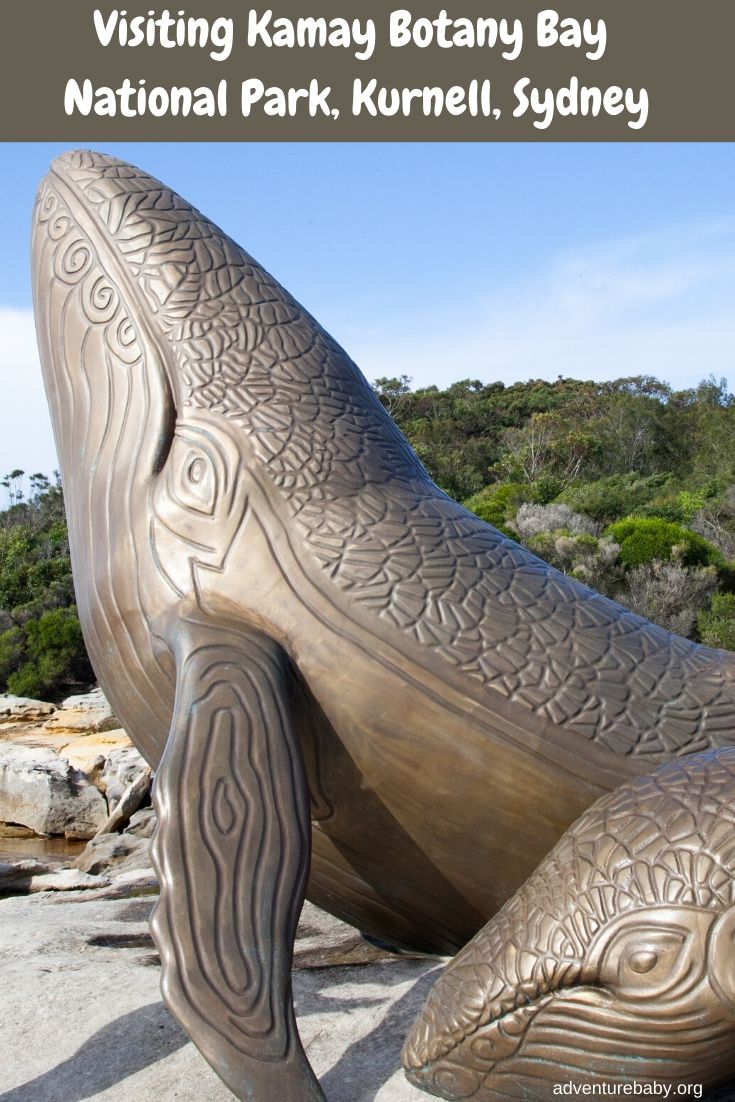 Kamay Botany Bay National Park in Kurnell is the landing place of the HMS Endeavour, and place of first contact between the local Aboriginal people, Captain Cook and the ship’s crew.

It is one of NSW’s most significant heritage sites, and was included in the National Heritage List in 2004. 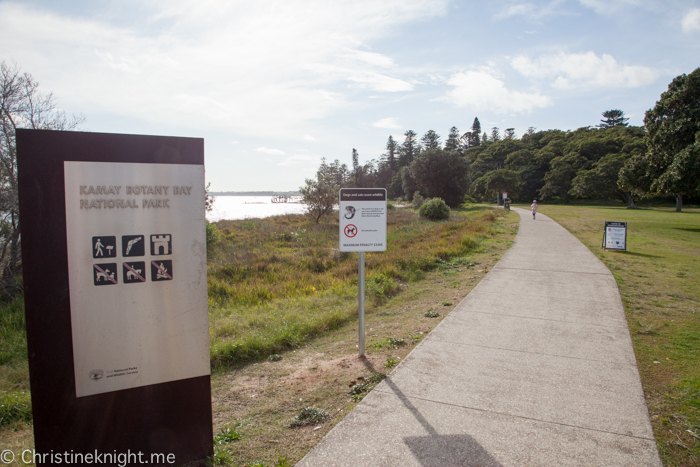 There are many reasons to visit Kamay Botany Bay National Park, from exploring the history of the peninsula to leisure activities.

The Kurnell Visitor Centre is currently closed for renovations, but would usually be the best place to start a visit and learn about local Aboriginal culture and history, including encounters with the crew of HMS Endeavour in 1770. 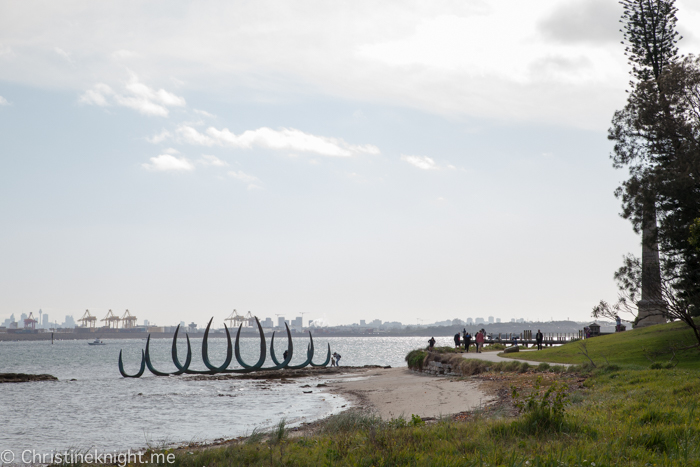 To understand the historical events that took place here, take the Burrawang Walk, a paved path that leads to several of the area’s historic sites, including Captain Cook’s Landing Place. 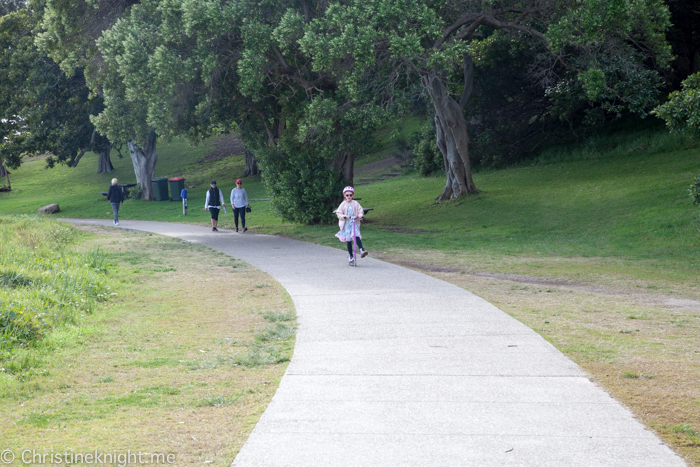 The walk starts at the Kurnell Visitor Centre. It is a 1.2km loop and takes anywhere from 15 – 45min. A large section of this walk is paved and wheelchair-accessible, however the last section that leads to the new whale sculpture is not.

The Burrawang Walk tells the story of the first meeting of European and Aboriginal culture. During one section of the walk there is a a soundscape featuring Aboriginal language, children laughing and clap sticks. 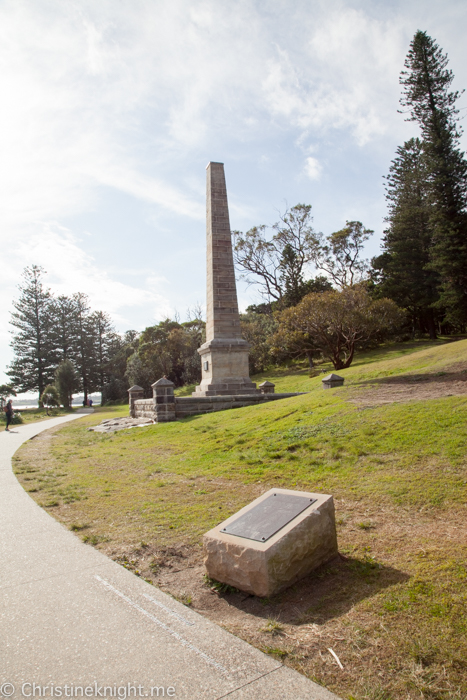 The walk leads visitors past many of the historical sites on the peninsula, including the welcome wall, freshwater stream, the meeting place, Banks’ Memorial, Ferry Shelter Shed and Captain Cook’s Landing Place. 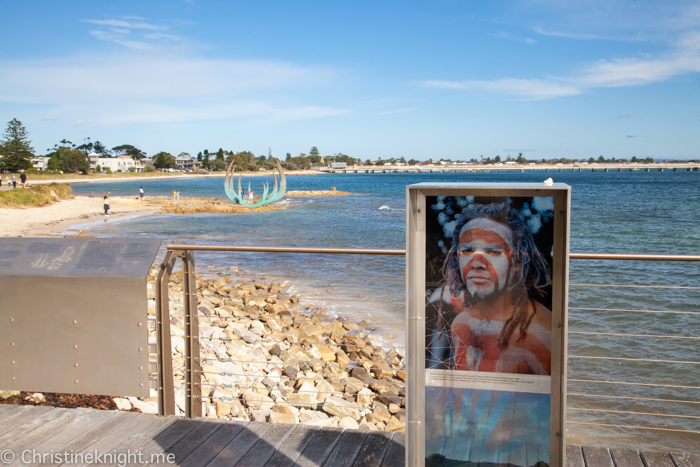 There are interpretive signs along the walk that explain the significance of the sites and perspective of both the Aboriginal tribes and European ship’s crew, including the first impressions both had, and the deep misunderstanding between the two cultures from the very start. 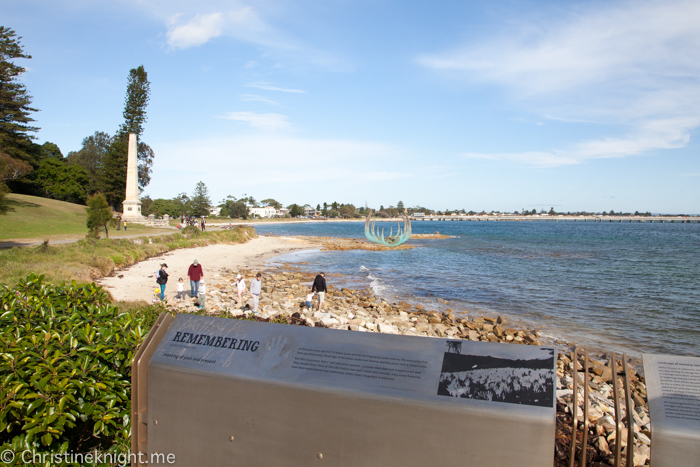 In 1770, Lieutenant (later Captain) James Cook, along with botanists Joseph Banks and Daniel Solander and the crew of the HMS Endeavour, landed at Botany Bay’s Inscription Point. He and his crew stayed in the area for eight days. 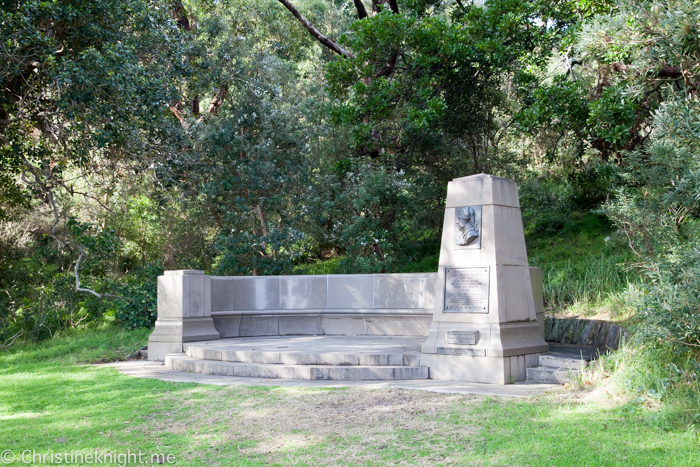 Cook and Banks recommended Botany Bay as a suitable site for settlement, however upon inspection by Captain Arthur Phillip it was found unsuitable as it had no secure fresh water or suitable anchorage, resulting in the selection of Sydney Cove to set up a penal colony instead. 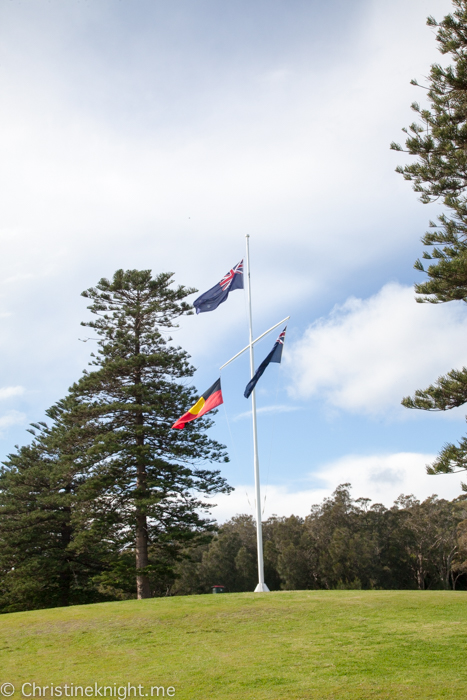 There were Aboriginal people of two different nations living in the area at the time – the Goorawal People and the Gweagal People. Their way of life, responses to the landing and consequences following the invasion have been included in the interpretive signs on display. There are several significant historical Aboriginal sites throughout Kamay Botany Bay National Park including middens and engravings.

Read about an Aboriginal perspective to the landing here.

2020 marked the 250th anniversary of the encounter between Aboriginal Australians and the crew the HMB Endeavour on 29 April 1770. Three large bronze sculptures of significance to the Gweagal Aboriginal People were installed along the walk to acknowledge the anniversary, designed and created by Aboriginal artists Julie Squires, Theresa Ardler and Alison Page.

The works include both Aboriginal and European viewpoints of the arrival of the Endeavour. 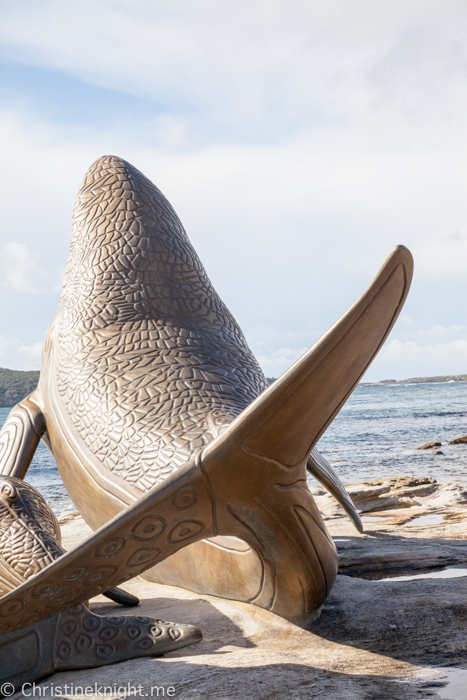 Julie Squires and Theresa Ardler’s work ‘Wi-Yanga and Gurung The Whales’ are based on Ardler’s painting on her Budbili, a possum skin cloak. “The story behind my Budbili is connected to the Sydney rock engravings of the mother humpback whale and her baby, out at La Perouse on the shores of Botany Bay. This engraving is a prominent landmark from my ancestors who carved the rock and continues to hold cultural and spiritual connection to our sea and country.” 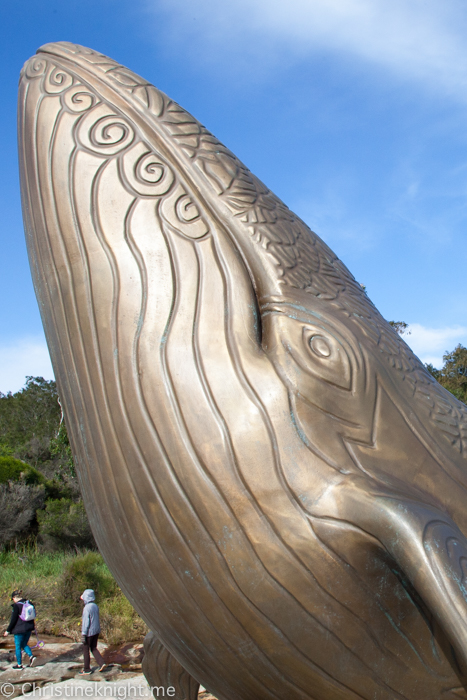 A Rock Weave was also installed near the whales; a woven fishing net was hand made by Aboriginal Master Weaver Phyllis Stewart and cast into bronze by sculptor Julie Squires. 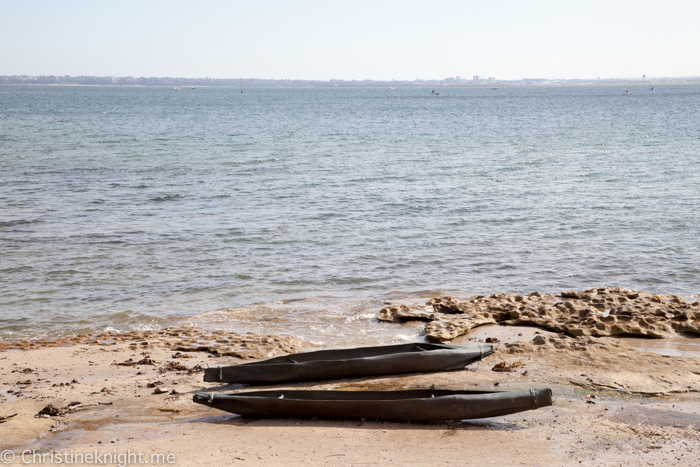 The ‘Nuwi/Canoes’ represent stringy bark canoes that the the Gweagal Clan traditionally fished from. “During their ‘first contact’ observations, both Cook and Banks recorded this practice,” explained Ardler. 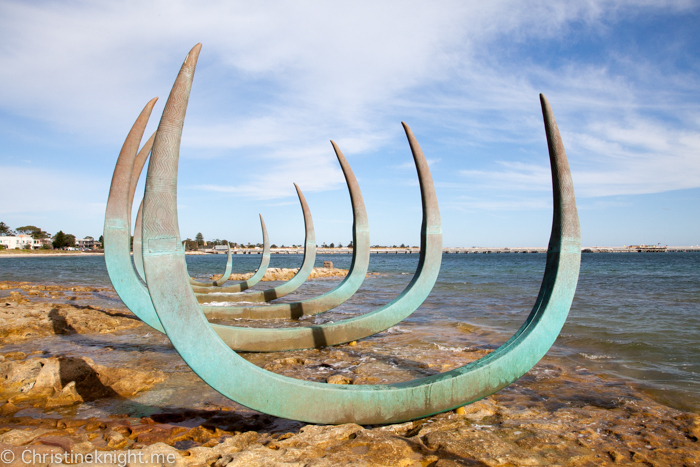 Alison Page with Nik Lachacjzak designed ‘Eyes of the Land and Water’. The work is an “abstraction of the ribs of the HMB Endeavour and the bones of the Gweagal totem the whale”. Working closely with researchers at the Gujaga Foundation and Gweagal artist, Shane Youngberry, Page and Lachacjzak developed cultural and historical content which was etched into each rib, including a description of the encounters at Kamay in 1770.

“The Eyes of the Land and the Sea’ is a story about discovery. Not the discovery of land by England, but of all Australians discovering our true history as we move together towards a reconciled Nation,” explained Page.

Read more about the mixed response to the anniversary commemoration here.

Kurnell is an excellent spot for whale watching between June and July. Drive from the visitor centre to the Cape Solander viewing platform to watch the whale migration.

Inscription Point and Sutherland Point are popular spots for diving and snorkelling.

Just past the whale sculpture are some incredible rock pools to explore. 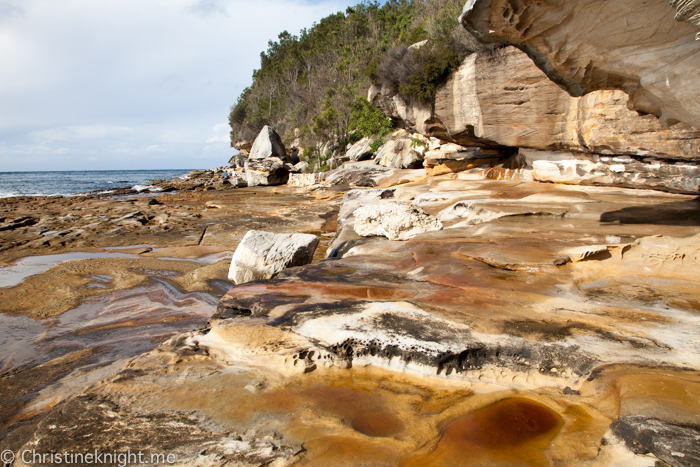 Try the Banks-Solander track and Cape Baily track for a longer walk. There are plenty of native birds to be spotted. 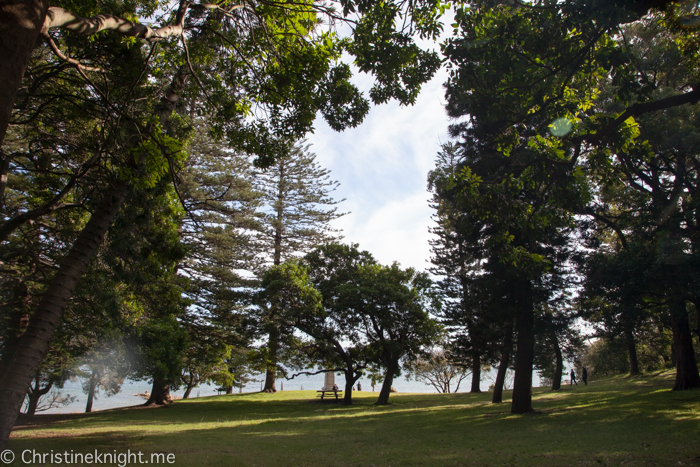 There are brand new bathroom facilities available in the park. 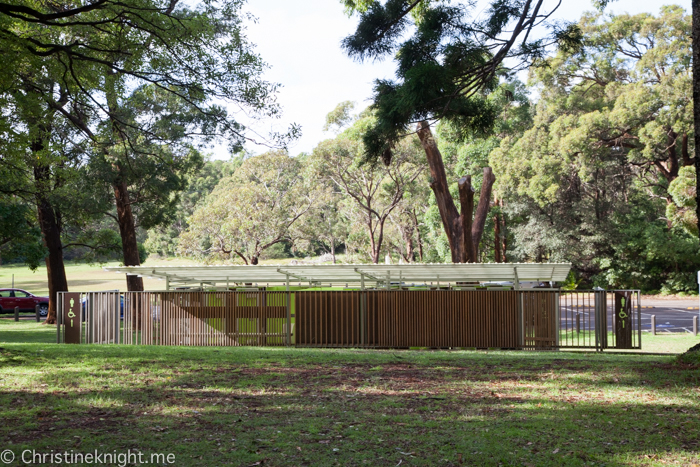 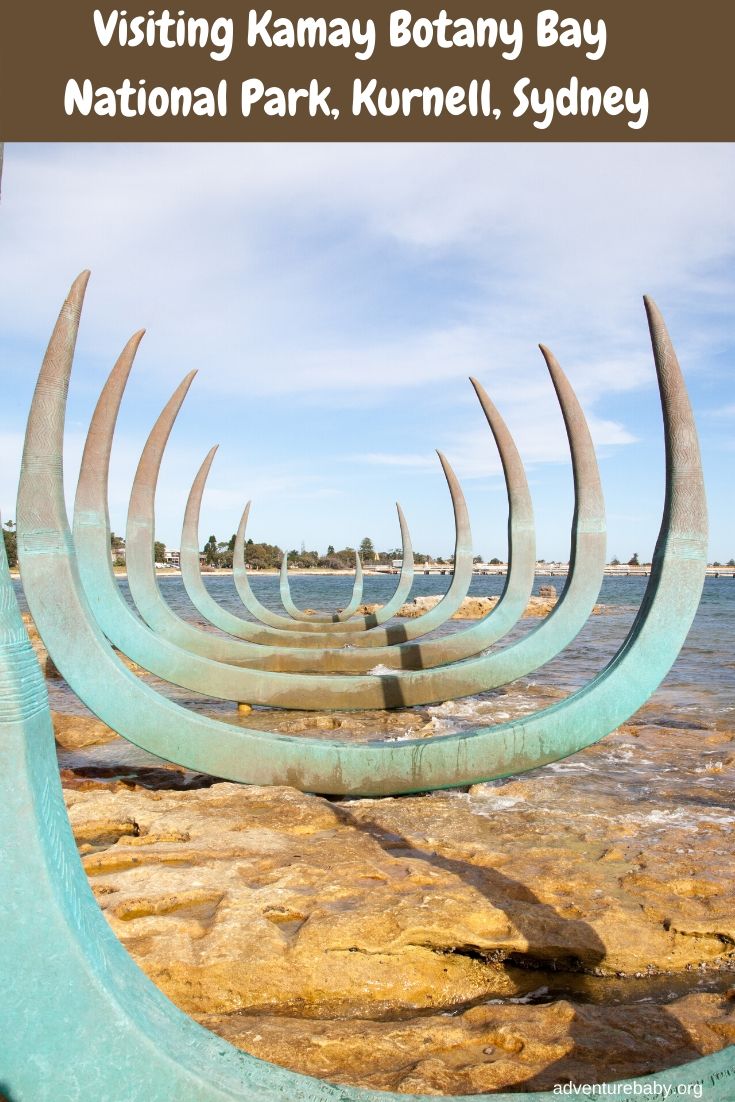