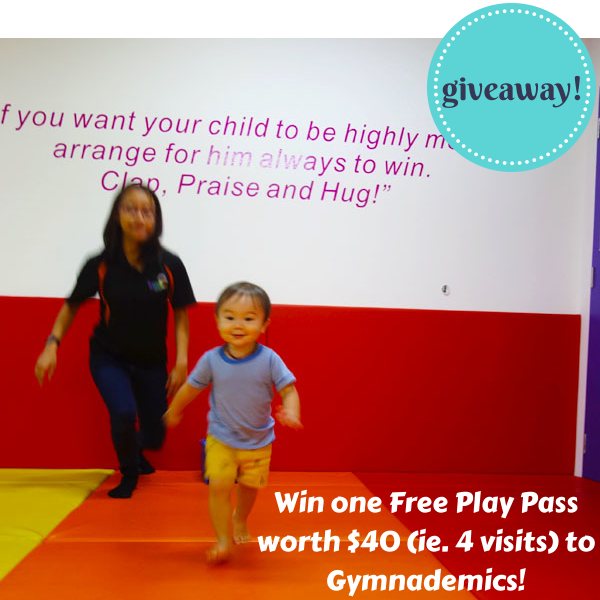 Remember when we did a feature on Gymnademics?

Carter’s started with them! He’s been to two sessions now and is really enjoying it. I’ll be frank though, his first session there was just him being aaaalllll over the place. He couldn’t focus on anything the teachers were saying/doing, because he was just so fascinated with the room and all the fun things in it! But, when he came back a week later for the second session, he went through all the routines just fine, and was actually interested in the flash cards and activities.

It’s so nice seeing your child captivated during class, you know? Seeing him happy and soaking in all this information and activity makes my day! I think he really enjoys the fun and music during each class.

Gymnademics are giving away one Free Play Pass worth $40 (ie. 4 visits)!

a Brunch with my Baby giveaway

You can submit some of the entries more than once a day, so come back tomorrow to get more entries in the draw.

Giveaway will run from 7 Feb– 13 Feb 2014 inclusive.
Winner’s entry(s) will be verified according to the entry criteria(s). 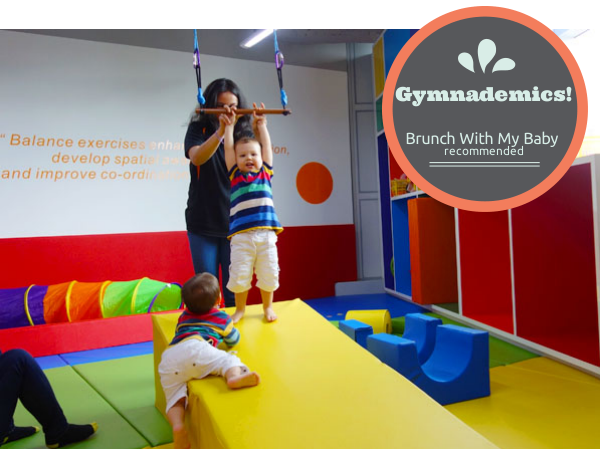 So what of their regular classes?

They go for a 1 hour duration and, believe me, will have you pretty tired out afterwards! It’s a lot of activity, coupled with learning exercises. Here’s a rough idea of what happens during Carter’s class:

First there’s flash card matching revision, from words learned last week. Hunter did a term of this last year and, believe me, you’ll be reaaalllyyy impressed by what they remember from the previous week’s lesson!

This is Carter matching up “sectional sofa” with the picture. I’m not sure if that was a fluke 😉 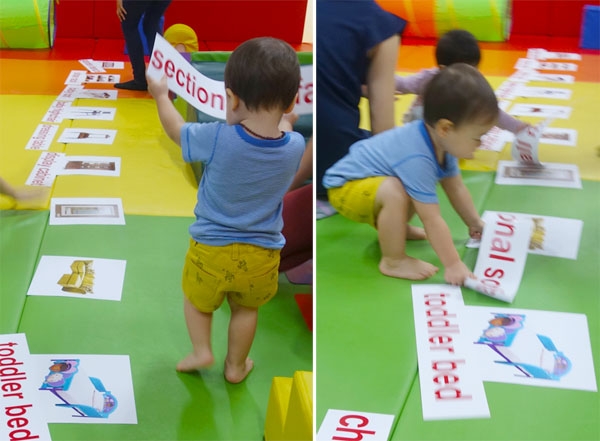 After that, it’s a bit of musical instrument playing (or banging) time. Both my kids have always gone for the little drum! Carter is an incredibly serious drummer (fat cheeks and all) and will studiously whack the stick onto the drum. 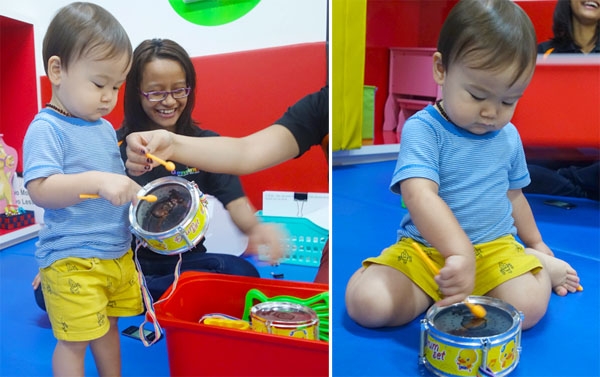 Then there’s word flashcards, based on the theme for the week. This week, it’s Electrical Appliances. As you can see, Gymnademics doesn’t ‘baby’ down words or concepts. They use adult (and pretty difficult!) words. And, again, you’ll be really impressed by how much your kid can absorb within a few classes. 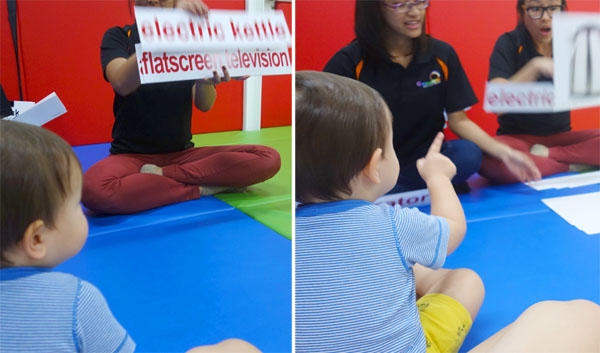 And it’s onto musical activity again, this time with wooden sticks! The kids love to wave them high and low and bang around, creating a mega ruckus 😉 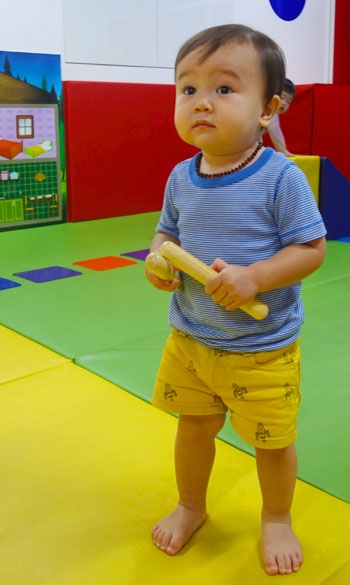 One of the most popular activities comes next – obstacle course/circuit. It is one phenomenal way to tire an active kid out 😉 There’s balance beam, tunnels, steps, slides, stepping stones – you name it!! Carter was a basket case during his first class (ran around everywhere!) but during his second class, he went through the circuit systematically.

Then there’s picture time based on the concept of the week. This week, it was Flying Machines! CARTER’S FAVOURITE. Needless to say, he was captivated, especially when the teachers whipped out a helicopter that had moving blades.

And then, flying trapeze!!! I’ve always thought this was brilliant fun, but I don’t think I’m allowed on it. This is Carter, being assisted (the teacher is holding his hands) on the trapeze. After 5 swings, he ‘flies’ into my arms! And, the idea is, with a bit of training, your kid can soon hold themselves up with no assistance. This activity trains their upper body muscles, and also increases oxygen to the heart due to the position. 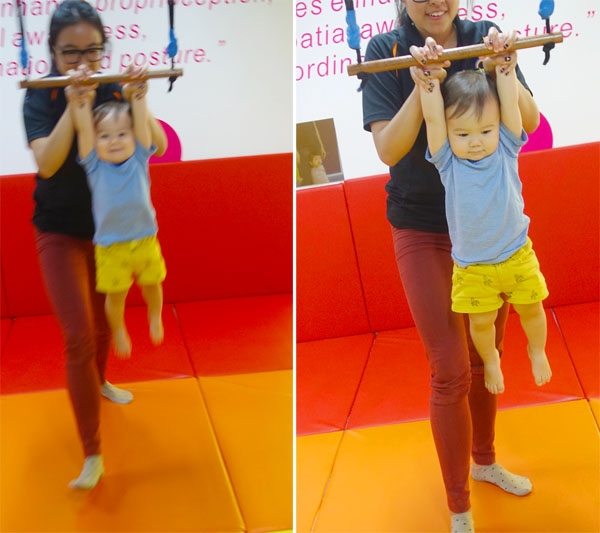 Gymnastics time! Every week, they progress in their activity. In this picture below, Carter is practicising his hand stand. And, after a few weeks, he will be able to do an (assisted) forward handspring! I thought Carter would go ballistic being held up like that (I think I would!!) but nope, he was actually really calm and quite pleased with himself afterwards. Go figure. 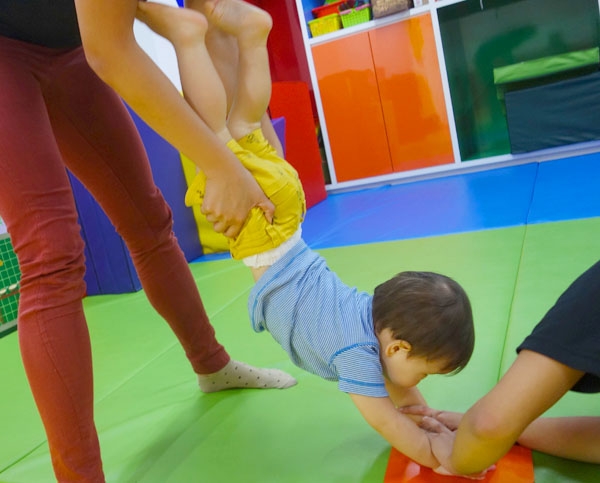 A bit of calm down time, so we did daily activities to music. This week, it was using a cut-out doll to “jump on the bed” and a toothbrush to “brush teeth”, which kids are supposed to respond to when they hear the appropriate “boing!” or “brush brush” sounds. It’s ridiculously cute to watch 😉 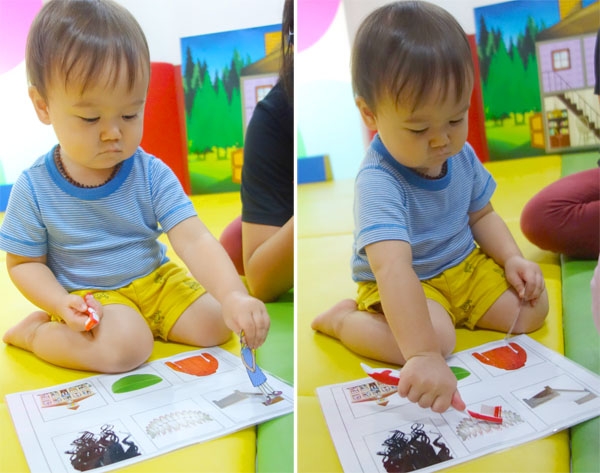 The craaaaziest part of the session – relay race!! Kids have to grab a toy fruit/veg, and run a short distance to drop it into a container, then run back to you to collect the next fruit. This is MAJOR EXERCISE for kids, considering the amount they run and how small they are. And they really have so much fun running back and forth, giggling away! 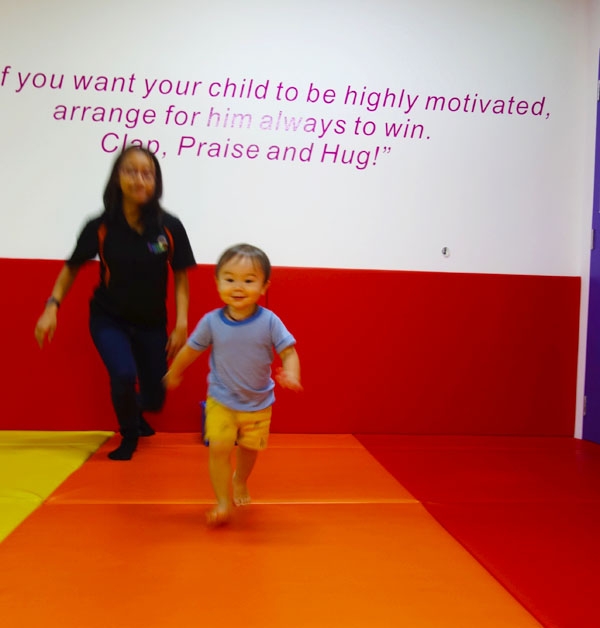 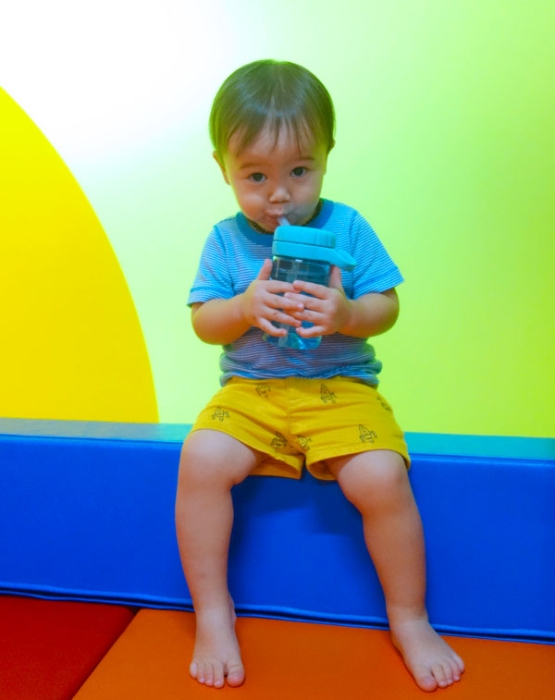 And then it’s parachute time, flipping it around to the music. Carter was pretty overwhelmed/scared when he saw it during his first session, but he loved it during his second session. 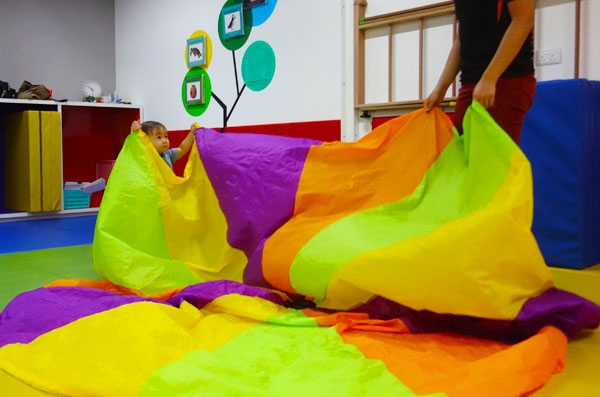 Story time, using flashcards. I’m not sure why Carter looks so transfixed by the picture of a Daddy ironing his clothes 😉 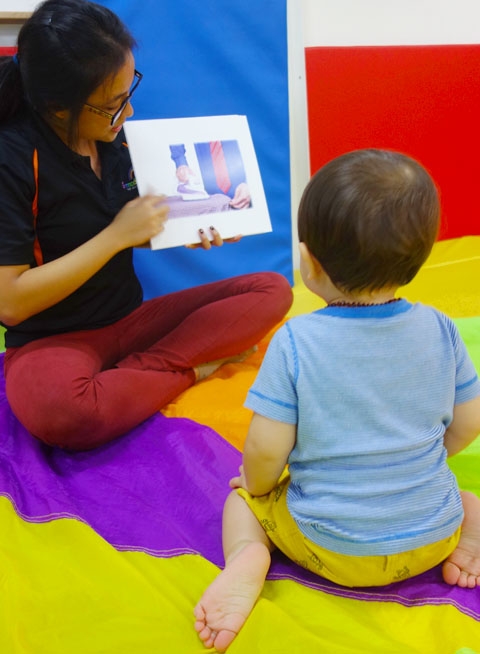 Magic box time! This houses a super fun hands-on activity, so it’s always a hit for the eager kids. This time, it was sticking on the matching number/colour. And Carter could do it after I showed him a couple of times! We’ve never done this activity before, so I was chuffed to learn of his new skill that I never knew he could do 😛 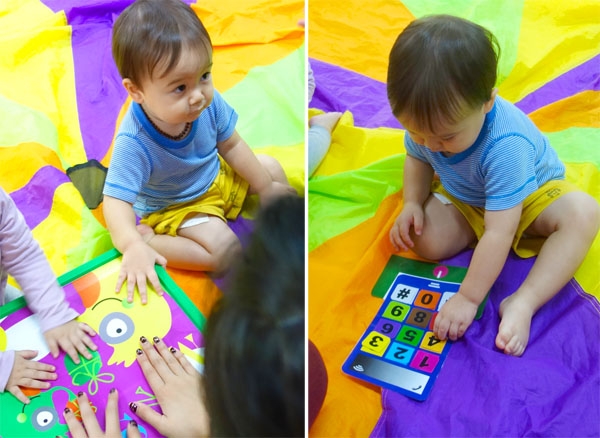 I love the catchy “Hip hip hooray, we learned something new today!” goodbye song near the end. I always get up and dance like a crazy person too 😉 And so do my kids! Both Hunter and Carter like to shake their booty and stomp around 😛 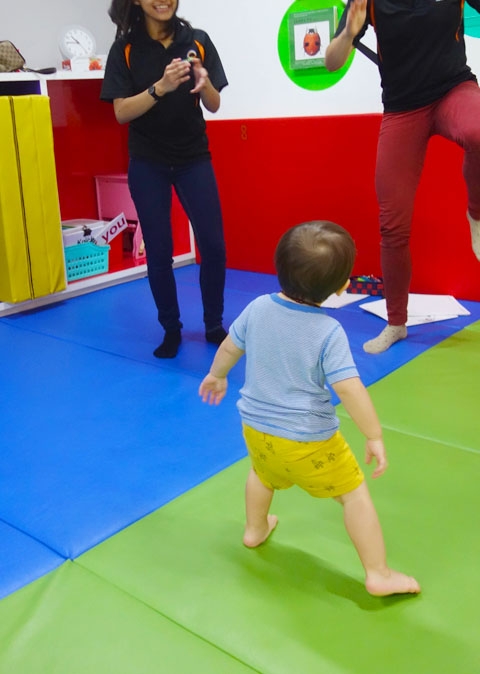 The class lasts for an hour, and frankly, I’m glad it doesn’t go any longer. I don’t think I have the stamina! It’s very go-go-go, and the kids lap it all up.

I really enjoyed Gymnademics for Hunter because, being a cautious child, I thought the high level of activity and gymnastics would help him out of his shell a bit.

And I enjoy Gymnademics for Carter because, a very active child, it gives him what he craves for and he completely knocks out afterwards. WIN. 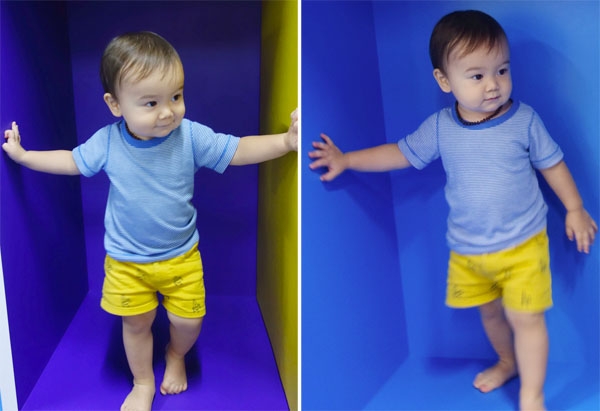