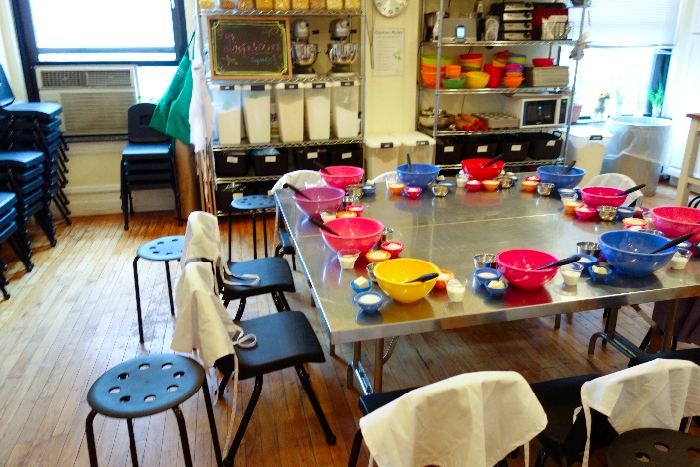 Cheese is really into “helping” me in the kitchen these days. She likes to “help” spread Vegemite on toast, “cut” vegetables and “crack” eggs in a bowl. She’s been so interested in food preparation lately that I thought I would give a Cupcake Kids class at Taste Buds Kitchen a go.

The class theme for this week was Pinkalicious (the theme changes every week), based on the bestselling kid’s book series of the same name. A cute table is set up for 10 kids and their parents, ages two to six, with all the ingredients laid out, ready for mixing. Cheese was the youngest kid in the class that day by a fair amount (she turned two in August). The kids were on average, ages four to six. 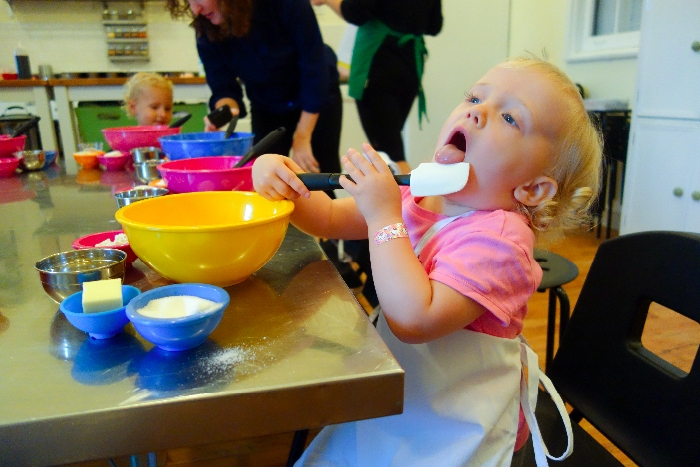 The above photo pretty much encapsulates how the class went. Cheese was thoroughly enjoying trying all the ingredients. She followed the simple directions, like which ingredient to put in the bowl, but mixing was a bit hard for her to really get right (time to step in, Mama!). 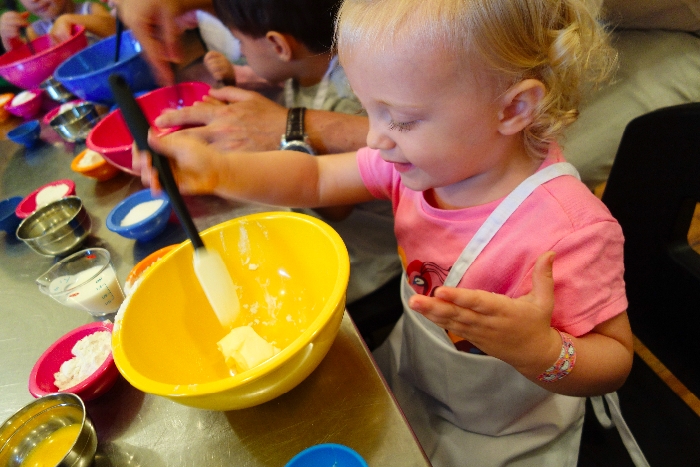 I’ve always loved baking, since I was a kid too, actually. I’ve been wondering how to introduce baking to Cheese, so this class was not just fun for her, it was also educational for me to see how I can teach my toddler how to bake. I have to admit, I thought the class was just cupcake decorating. If I’d known it was baking from scratch I might not have been so game to bring her, as it’s definitely not something I would have thought she’d be into and for which she would be able to sit through a class. 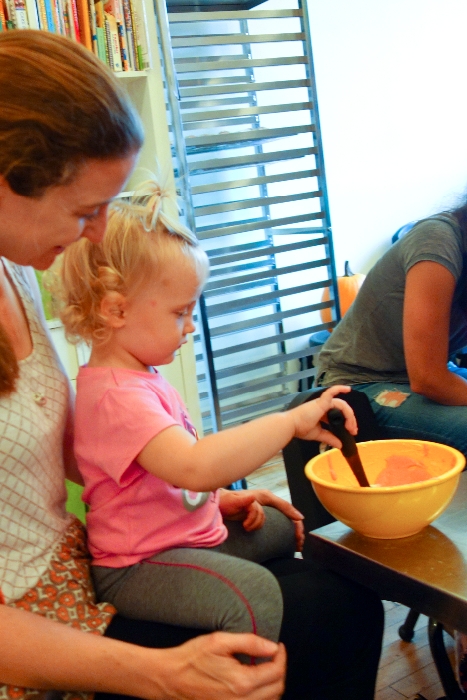 After mixing through the ingredients, it was time to spoon the mixture into cupcake pans and have them placed in the oven to cook. Notice how they’re all pink? 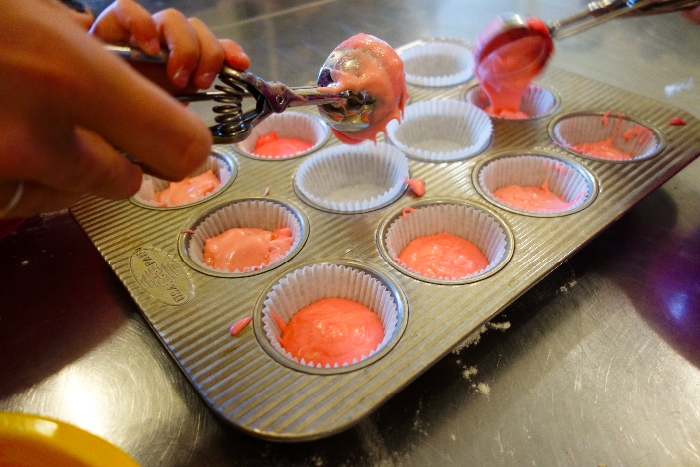 While the cupcakes were baking, Chef Maggie read Pinkalicious (which I’d never read before, so it was fun for me too, ha!), while the kids listened and colored in a special Pinkalicious-themed coloring sheet. 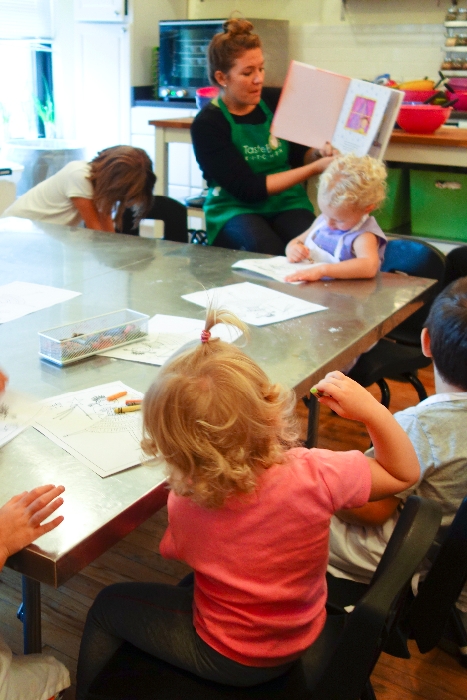 Cheese was really into the book. A few months ago, this would have been a disaster (Read: toddler running ALL OVER THE ROOM) but since she started preschool last month, her concentration has definitely improved. She was up and down a few times to wash her hands again and get some food to eat, but over all she was really into the activity. 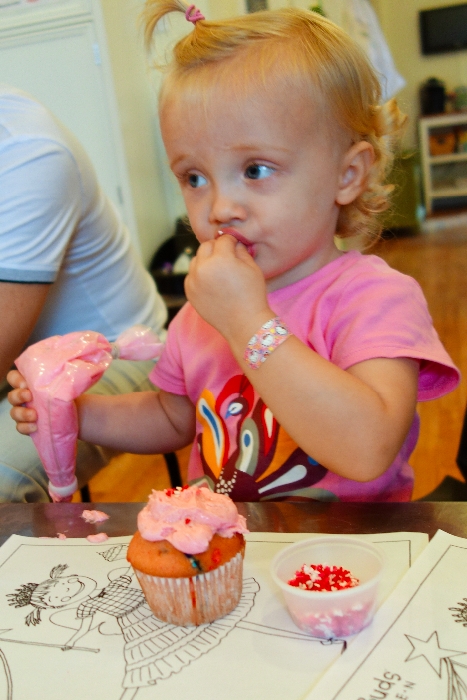 After the story came the frosting. The cupcakes hadn’t quite finished baking, so we frosted some previously prepared cupcakes while the others were still baking. After a quick lesson in the right way to frost, it was over to the kids, or in my case toddler, to let them do their stickiest. Cheese was in heaven. Didn’t want me to help (of course), so her cupcake looked kind of . . .  like a toddler decorated it 🙂 She really enjoyed picking up hearts and pink sugar and sprinkling them on top (and tasting a few). 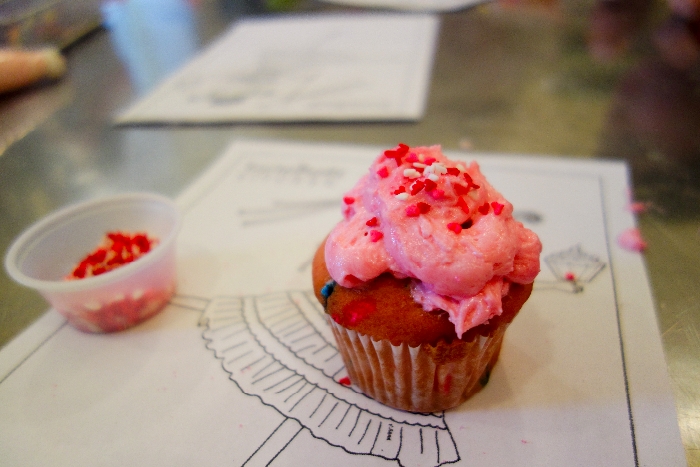 We were given a sweet little container to place one of our decorated cupcakes in to take home, while we enjoyed eating the other cupcake right then and there (of course). 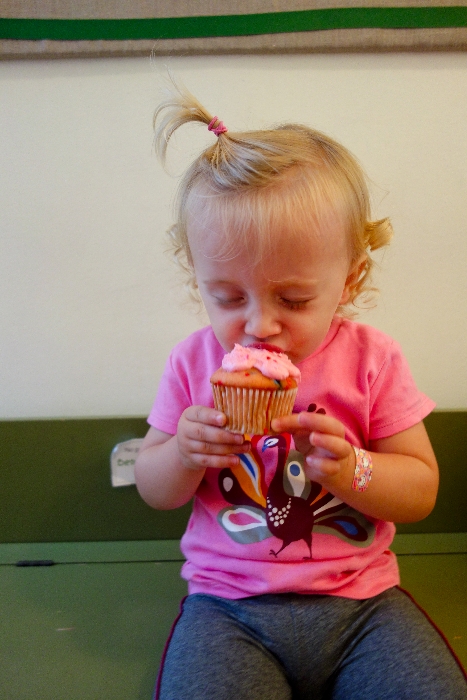 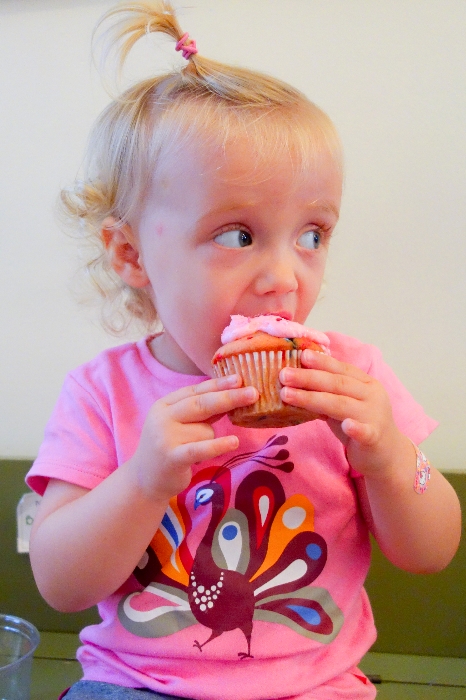 Cheese really enjoyed the class (she was going on about the “cake cakes” all the way home), and it was a fun activity for us to do together. I think she was a little young for the class, but not by much. I would definitely take her again when she’s a little older — probably in winter when I’m desperate for ways to entertain us both. As with a lot of things that I get stressed over (for nothing), Cheese proved me wrong in her ability to handle her first baking experience. Even though her attention span did wane at times, the class was a success for the both of us.

Brunch With My Baby attended as a guest of Taste Buds Kitchen. All opinions are our own. We happen to love, love, love cupcakes.