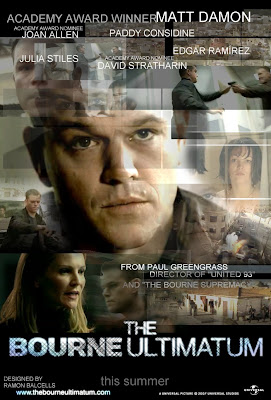 Tonight marked the final Bourne Fest, with part three, The Bourne Ultimatum. I joined 10 boys to watch the movie on opening night in Chatswood. The testosterone in the theatre was overwhelming.

I loved Bourne one, hated Bourne two, and loved Bourne three. It was a return to the themes of the first movie, with many very similar scenes marking a full circle.

There were a lot of extreme close-ups of Matt Damon, which made me see things I had never noticed before, like his funny slightly-raised eyebrow, and one eye slightly larger than the other, not to mention the mole on his lip. Interesting how even gorgeous people look odd when their face is several metres tall.

Bourne, as always, was a machine. No-one else except the terminator takes such a licking and keeps on ticking.

The only down side was the excessive use of “vomit cam” as Malcolm called it. Hand-held camera work throughout the action sequences made it hard to follow what was happening and left me with a bit of a headache. Or maybe I’m just getting too old for this much excitement.