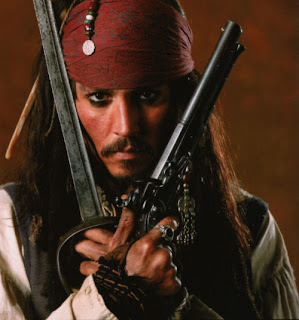 Alec and I saw Pirates of the Caribbean: At World’s End last night at Chatswood. I read some terrible reviews of this movie before we went in, so I was pleasantly surprised that I enjoyed it. The enjoyment of a person who is expecting the worst. Interesting.

The movie picked up where the terrible filler-middle film left off. I’d forgotten what had happened so was a bit lost for a while. Whose heart is that? Why is in a box? You get the drift.

I would have liked to have seen more of Johnny Depp’s character, but I was happy to see the return of Geoffrey Rush. Less Keira Knight would have made me a very happy girl indeed. Her journey from prim lady to pirate king was quite an adventure.

Orlando Bloom spent a great deal of the film as Keira’s arm candy or as a possible traitor. Not sure how I felt about this – but considering he isn’t up to scratch as a leading man, I guess the director wasn’t sure what to do with him.

Still, the monkey was awfully cute.

Worst:
There wasn’t a happy Disney wedding.
The pirates’ teeth. Why does piracy equal gum disease and slimy enamel?