I loved the first National Treasure movie – rollicking good fun, I think I called it at the time. Clean fun with a happy ending. My perfect movie.

When the sequel opened this week, Alec and I were keen to go. We’ve seen so many movies lately with sad endings, I just needed something happy!

National Treasure lived up to its promises – action, flippant, superficial characters, codes needing to be broken, and a happy ending. Perfect!

I enjoyed the entire movie. Yes, it’s not the best movie ever. In fact, it’s got some pretty bad things about it – bad writing and characterisation, clues that require enormous leaps of assumption to get the answer, which of course Nicholas Cage’s character gets off the top of his head, and Nicholas Cage himself – he looks like he’s lost quite a lot of weight and has had some kind of plastic surgery or air brushing on his neck. Still, all of this doesn’t matter. I really really enjoyed the movie and will be getting it on DVD to watch again on rainy sad days.

The premise of the movie – I really should get to that. Nicholas Cage’s character (Ben Gates) is presented with evidence that suggests his great-great-grandfather was a conspirator in the Lincoln assassination. In order to clear his ancestor’s name, he has to find the treasure his great–great-grandfather was helping to conceal. To do this, Gates has to break into all kinds of famous places like Buckingham Palace, the White House and kidnap the President to get information out of the legendary Presidents’ Book of Secrets, which supposedly contains all of the secrets of the United States, like the truth behind the JFK assassination. Far fetched – yes, Did I care? No.

The movie borrowed heavily from several other movies that I love, like The Goonies, Raiders Of The Lost Ark and The Da Vinci Code. At least it did it well! Fine holiday fun. 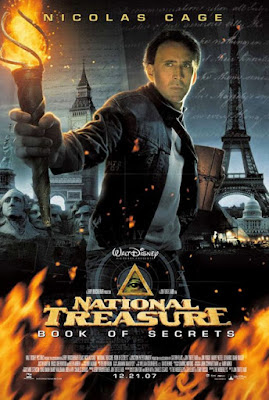 Christine is the editor of Adventure, Baby! She loves cake, her tolerant husband and her busy preschooler.