After breakfast we head off to Cape Otway Lightstation for scones and tea, plus a stunning view of the coast.

We then head on up the coast to Port Campbell National Park, where the Twelve Apostles are.

Along the way we stopped at the majestic Gibson Steps and then at the Twelve Apostles look out. The Twelve Aposltes were very beautiful, but after seeing so many photos they weren’t as impressive as the rest of the rock formations I knew nothing about.

I really loved Loch Ard Gorge (below), named after a clipper ship that ran aground nearby in 1878. We also stopped by the London Arch (formerly London Bridge until it collapsed while people were on it). 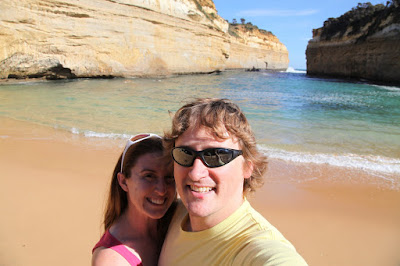 We drove out of the park until we reached our destination for the evening, Warrnambool. Nothing much to report here – it’s a great place to stop during whale season, but that’s about it. The whales have their babies right off shore, so it would be great to pass by again at the right time.