Our next stop was Triplet Falls, a bush walk that wound past three waterfalls. 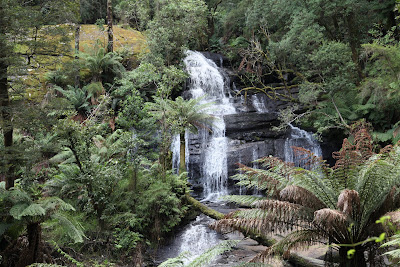 We had hoped to visit another waterfall after this, and drove there quickly as the sun was starting to sink in the sky. We figured we had about 30 mins until the sun set, so dashed through the bush trying to find the waterfall before the sun completely set and we were left in the dark in the bush. It was a little like being in a movie where the main characters do something completely stupid, like run into the bush at sunset with no phones, torches or supplies and then get eaten by rodents of unusual size … after about 15 minutes of running through the bush and still not finding the waterfall, we admitted defeat and quickly returned to the car – just in time to get back to the road before dark completely fell.
Dinner was at one of Apollo Bay’s most highly recommended venues, Buff’s Bistro, an Italian / contemporary Australian little place that was booked out solid the whole time we were there. The food was delish, the staff friendly and the wine they served was local and matched well to the meals. Yum!