For our first Easter weekend for just the two of us, we decided to drive the Great Ocean Road in Victoria. We flew down to Avalon Airport after work on Thursday night and spent Good Friday checking out Geelong (what’s with the weird peg people?) and then driving along the coast.

We had a quick stop at Torquay, then drove on to Bells Beach, where the Rip Curl Surf Pro was being held. We stopped off for a while and watched the grommet competition that was being run at the time. Next stop was Anglesea for lunch and a play on the beach, followed by a stop off at Airley Inlet lighthouse, which was used in the TV series “Round The Twist”.

It was then a windy drive to out evening accommodation in Apollo Bay. The road hugs the coast line so the whole drive is amazingly picturesque. Somewhere along one of the endless stretches of road we saw a few people had pulled their cars over and we standing around pointing their cameras into the bush. Being the stickybeak I am and always after a good photo, I pulled over also, and found that they were photographing koalas in the wild – right by the side of the road!

The koalas were sooo cute. Sleepy, grumpy little people. and they were really close to is – so close I could have reached our and given one a little pat if I didn’t think it might have gouged my eyes out for waking it from its eucalyptus-induced coma.

We spent tonight and the following night at a cute little BnB called Captain’s On The Bay – highly recommend. 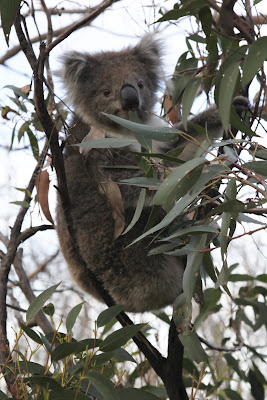