I was really keen to see this stage show but didn’t manage to get tickets. A work colleague of mine sold me his the day before the show as he was unable to make it – really tough for him, but fabulous news for Rosalie and myself.

I saw the movie a long time ago and didn’t remember much of it – the show was faithful to the movie from what I remember, but what resonated most with me was the beautiful, haunting music.

The show was created by Matthew Bourne, and was a strange hybrid of dancing and what could almost be described as mime … it was very successful however and incredibly entertaining. The actor who played Edward was fabulous – as was the whole cast actually.

I would strongly recommend this show for anything who isn’t a big fan of musicals or dance shows as well as people who are. 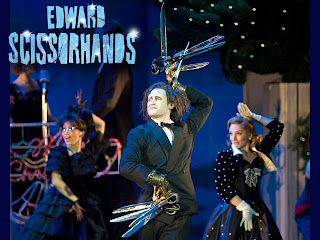