Alec and I had a dinner and movie night, and decided to see Lions For Lambs, the new Robert Reford movie. As it stars Tom Cruise, we were a little apprehensive about it, but after some glowing reviews decided to give it a go.

Lions For Lambs is a very “talky” political movie. Nothing much actually happens, but there is a hell of a lot of talking going on, which makes it hard for me to condense into a short review.

Tom Cruise plays a smarmy senator – perhaps the most perfect role he’s ever had. Meryl Streep is fabulous as a hard-hitting journo wanting to tell the world what’s really going on but facing opposition from her commercially-bent TV station. Robert Redford is a university professor who is trying to inspire students to reach their full potential and give a damn, frankly. In the midst of these three characters talking, talking, talking, a deadly situation is being played out in Iran. Two young soldiers involved in a new military strategy (being hailed as the new solution by Cruise’s senator) find themselves alone and stranded while the enemy approaches on all sides.

When the drama flicks back to Cruises’ smarmy senator telling Streep’s journo how they have to do “whatever it takes” to win, you can’t help but think of all of the young men and women in the Middle East right now whose lives are being sacrificed because of men like this, for a cause that has been warped by propaganda to resemble nothing of the real reasons the troops are actually there.

It’s time we all opened our eyes and stopped being apathetic. 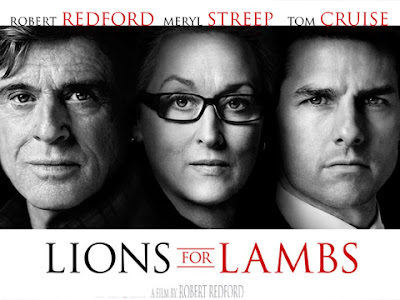