In a fit of what I can only call crazy, I signed up for the volleyball (!!) and netball teams for the NSW corporate games.

I haven’t played volleyball since .. well, I’ve never played volleyball, so I don’t know what possessed me there. Netball was a no-brainer – except we signed up and then Alec had to pull out due to a sudden work trip – nooooooooooooo!

It was an incredibly exhausting week – netball practice game Wednesday night, volleyball Thursday (we had our butts kicked in all three games), followed by a day of pain on Friday and then … six games of netball on Saturday, starting at 10:45 and ending at 6:30. I don’t think I’ve ever been so tired and drained.

Despite my lack of experience, I really enjoyed volleyball – until a rogue ball hit my arm and it swelled up to double the size, and I also really enjoyed the netball day, even though it was challenging, both physically and mentally.

With the netball comp, we won the three games in our pool but ended up placed fourth over all, so we had to play a quarter-finals game (which we smashed) followed immediately with a semi-finals game against the first seeded team. There was NO way we were going to win this game, and moral went way down. There wasn’t much of a come-back after that. We had to play one last game to decide third and fourth place, and we were just so over it after having our asses kicked in our fifth game for the day that having to straight away play a sixth game was just too much.

I’m super-impressed at how well we did – fourth out of 20 teams, with a team that was not bad, but definitely not our best. And to play six games in a row – I think it was an amazing effort and I was really proud of our achievement. 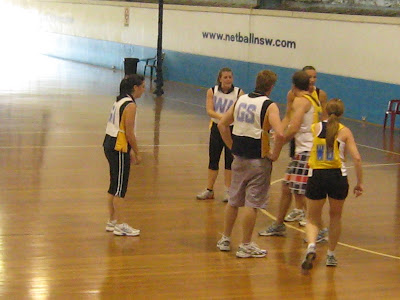 Volleyball – going for a shot! 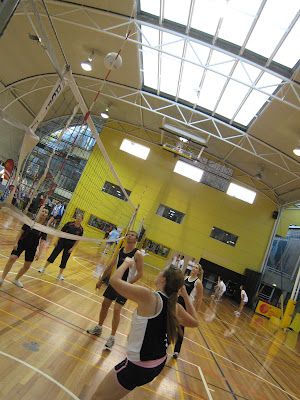 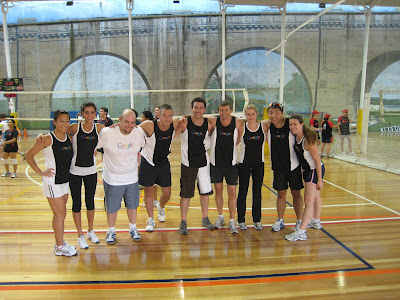