On New Year’s Day, Alec and I went to see Death At A Funeral, a British comedy recommended to us by Alec’s Dad.

I have to say, I did laugh a lot. I thought it was a bit odd in part, quite over the top in others, but in total, really funny and particularly good to watch when i had been feeling low over being so sick.

The general storyline is that a father dies and his family and friends convene at the family home for his funeral. The film interweaves multiple story lines, involving members of the family and a mysterious stranger who has a secret about the deceased. There is accidental drug-taking, nudity and dwarfs. How could it not be the funniest funeral ever?

I particularly liked Alan Tudyk as Simon Smith, who also stars in Serenity and Firefly. 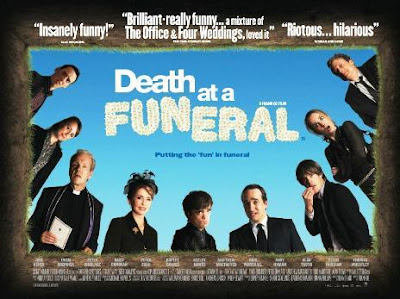