I wasn’t sure if I should blog about this, but I feel compelled to save any of the few people who stumble across my blog from the horrendous movie that is Good Luck Chuck.

As it stars Jessica Alba, I thought it would be a romantic comedy like Knocked Up, but no, it was actually about 100 times cruder and sexually graphic that KU, and was without a hot male lead. Hello? What was with the ugly guy with the expressionless face? Rule number one for romantic comedy: The leading man must make the women in the audience swoon. The only swooning I did was in horror at the multiple graphic sex scenes.

The general premise of the film is that Chuck has been hexed as a 10-year-old by a girl he rejects at a party and cursed to be always outside of love. As an adult, Chuck is unlucky in love – when he dates a girl, she meets her soul mate and gets married right after he breaks up with them. This gives Chuck the reputation of being a lucky charm, so women everywhere want to shag him – hence the excessive amounts of graphic sex scenes we endured. Chuck is also in love with Jessica Alba’s character, and [SPOILER ALERT!] gets the girl in the end. Huh? How does that work? The guy sleeps around and STILL gets the nice girl in the end? I don’t think so.

The only redeeming feature in this movie was the penguins that Jessica Alba’s character is obsessed with. It comes second only to Happy Feet for pure amount of penguins and talk about penguins. It was odd juxtapositioning though, like the movie producers thought that pairing off cute sweet penguins with disgusting crude men would make for a movie both girls and guys would enjoy. Umm … wrong? And thanks for sending out the message to guys everywhere that they can have both the girl who sleeps around to have fun with, and the virgin to marry.

Save yourself the hour-and-half and the $15. Don’t even waste the bandwidth to download it. 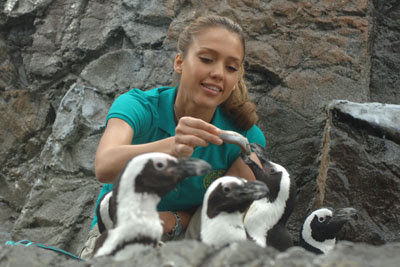 The only inoffensive shot I could find from the movie. Penguins shouldn’t be involved in this type of movie!